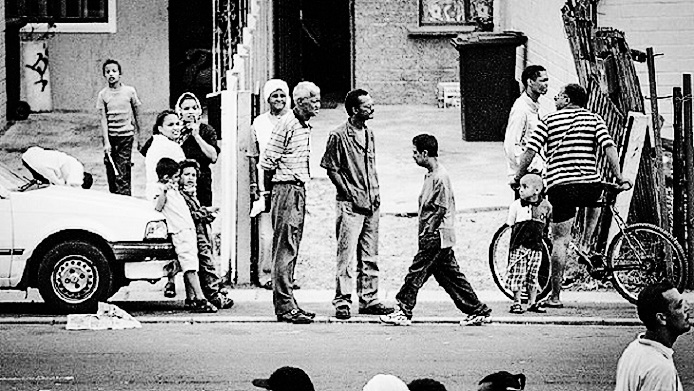 The Bromwell Street evictions sparked a familiar chain of thought for me. I want to know what the role and potential of middle class Black people – those with education and decent salaries like me is, in negotiating the complex forces of gentrification and spatial violence. What do people like me do to resist the ‘market forces’ reorganising Cape Town in familiar racialised ways?

In an effort to unearth my own positive position, I’ve been engaging in conversations with other people with interesting opinions in this space. Particularly, I’m interested in people working in urban sustainable development, people of colour, and people born not-quite-free trying to navigate the same complexities as myself.

My first conversation was with Lauren Hermanus of the Massive Small Collective. She put a different questions to me: How does the level of finance required to enter the property market create and close space for historically disadvantaged South Africans, to really make that disadvantage history? How does this stop us from building wealth?

She says, “The financial barriers to property ownership limit the ability of people to really influence the urban landscape of cities like Cape Town. It will not be fixed without active address. We no longer need active apartheid planning to keep black people in black neighbourhoods and on the fringes of the city. The market does that.”

We speak about how the rungs on the social ladder are often just too large for people to move up. From homeless to an informal shelter, from a shelter to a formal house or apartment, to a property you own…and on to a place where you can increase the value of the property you own, gradually, over time and in small increments.

“It feels very South African. It feels very defined by race. But we need to understand how this pattern plays out in other contexts so we are not limited by our own experience.”

We do not immediately agree on this issue. I feel like the Black middle class should be doing more to oppose the kind of development that plays out like the Bromwell situation. One of her ideas is for government to seriously consider housing, not only for the most vulnerable South Africans, but how over time the initial social housing intervention becomes a critical input for increased wealth and well-being.

“I’m not saying government resources should be funnelled away from low-income households. I’m saying let’s be realistic about how far a decent pay check goes when your parents cannot help you to buy a home”, Hermanus says.

So where do you think it’s done well, I ask? She points to the Hitas model in Helsinki. Like the City of Cape Town, Helsinki was in the privileged position of owning a significant amount of public land. It has been using this land to shape the kind of society it wants. It requires a mind shift to see land and property as a tool for economic development – an investment with a social return that is as important as a monetary one. The concept is a little like our gap housing, but it is not for a specific income level.

Imagine you fall behind on mortgage payments because of a major health incident, or your freelance work dries up, or any number of setbacks that threaten your resilience in the middle class. We do not have a lot of protection here for when things go wrong. Climbing the social ladder might be hard, but falling off it is easy. Hitas scales down the financial barrier to re-entry or for first-time entry into the property market.

Scale, argues Hermanus, is critical in other ways. Those large RDP developments where a mass developer gets to squeeze out a huge profit- those are too big to succeed. Why? Their scale requires a huge piece of open land, which means somewhere on the fringe where there are no resources and services (think of Wolwerivier). A single large company extracts all the value from the hundreds or thousands of units in a contract. Improving those homes is very costly to the people that live in them.

Around the world we are seeing examples of the social and financial benefit of small-scale development – limiting the scale of urban development projects and encouraging diverse participation in the industry. She says: “my interest in scale and incrementalism has been developed in conversation with Massive Small veteran urban planner, Kelvin Campbell, and his son Andrew, who leads the Massive Small Collective”.

Small-scale urban development creates more opportunities for wealth generation, greater capacity for attention to local context and need, and a better focus on the humans that inhabit the built environment. It is not just about small-scale building interventions. It is about the interaction between these and financial arrangements.

Hermanus didn’t really answer my question. Instead, she gave me a context that suggested that the mobilisation of black income is linked to systemic mechanisms that link property ownership and wealth creation. So what do I think about that…? This is the question I had on my mind when I joined the second Passing on the Baton Dialogue hosted by Democracy Works Foundation, In Transformation Initiative and Institute for Justice and Reconciliation. To be honest, I really wasn’t too enthusiastic about spending the next few days rehashing the issues of race that would leave me feeling utterly drained. I wanted to talk solutions. I am no longer interested in discussions that don’t lead to action. I want to know what my specific role is in all of this.

It was with great relief that I discovered the tone and structure of this iteration of the dialogue would be significantly different from the first. The facilitation forced me into an introspective thought process to uncover where my own power lies in addressing the continued apartheid of our cities. In essence, the dialogue provided me with a reality check.

My position at the start of all this was that the black middle class must use its economic power to stand up against issues such as gentrification. But between the Dialogue and my conversation with Lauren, I realised that we ourselves are victims of malevolent market forces, and this idea of a rising wealthy black population is an over-exaggeration. I have been a working professional for six years now, and I can’t afford decent housing. The most I can do to influence gentrification in Woodstock is to not go to the Biscuit Mill or write a letter to Patricia de Lille. How do I compete with the kind of wealth that can buy up an entire street of houses to remodel into a parking area? Some people’s cars are more important than other’s families.

We were asked to answer two questions in relation to the issues we seek to address: What tools do I currently have? And what tools do I need? My education, my experience and other strokes of luck and hard work, will likely never counter-balance the head start that family wealth or inheritance or even the ability of a parent to co-sign on a mortgage has. And as increases in the ‘value’ of housing far outstrips salaries, what this means is our democracy, in its current form, will not deliver equal opportunity to all citizens.

The uprisings at our universities are a reminder of the unsustainability of that kind of inequality. My peers still believed that a degree and a job would get you there. These students appear to have stopped believing that myth.

I still do not know exactly what my role is or where the answer lies, but the question has not and will not leave me. It is a question that should not leave the minds of city mayors and national leaders either. Whether we look to Finland or elsewhere or invent something specifically South African, our democracy depends on much more proactive housing interventions.

In her professional and personal life, Rushka is interested in socio-economic inequality and inclusivity, and how environmental sustainability can contribute to solving these issues. She is a development practitioner, working at the intersection of environmental and socio-economic issues to develop sustainable solutions to complex problems.

Her current work involves contributing to policy, strategy and projects for sustainable and inclusive economic development in the Western Cape. Rushka earned a social science degree, and after beginning her working life in the marketing world, has crafted a career in public sector environmental sustainability. She works in the Green Economy within the Western Cape Government Department of Environmental Affairs and Development Planning.

Conducting oversight and promoting public participation during the COVID-19 Pandemic